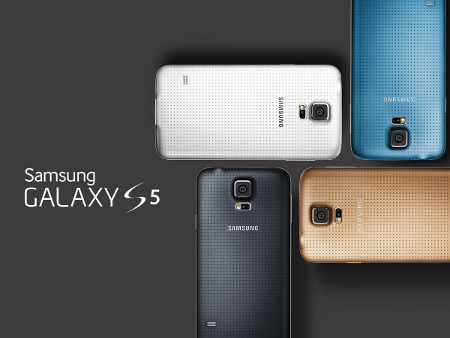 Ready for the next flagship smartphone? Samsung certainly hopes so. Just announced at Mobile World Congress in Barcelona is the new Samsung Galaxy S5 – the company’s next flagship Galaxy smartphone running the latest and greatest version of Android, version 4.4.2 “KitKat”. Compared to the popular Samsung Galaxy S4, the new flagship from Samsung comes with an even larger display at 5.1 inches and a faster quad-core Snapdragon processor. Along with improvements to performance, the home button now also acts as a finger-print sensor much like the iPhone 5s. However, unlike the iPhone 5s, users can use the fingerprint sensor to not only unlock the phone, but also make purchases with PayPal.

Samsung also updated the back-facing camera on the new phone with a bumped-up 16 megapixel lens which is able to focus in just 0.3 seconds and experiences no shutter lag, and can now also shoot 4K video – four times the quality of HD. On the topic of usability, the new Samsung Galaxy S5 is also dust- and water-proof – able to withstand sitting in 1m of water for up to 30 minutes – which should be just enough time for you to pluck up the courage get your phone out of the common place where phones get dropped into ;-). What about that quite vulnerable charging port on the phone, you ask? The entire micro-USB port is covered by a tab to keep the phone waterproof when it isn’t charging.

Inside, the phone is powered by a 2.5 GHz quad-core Snapdragon 801 processor, 2 GB RAM, up to 32 GB of internal storage (and up to 64 GB of external storage with the included micro-SD slot), and a 2,800mAh battery which Samsung claims will give users up to 21 hours of talk time. The new Samsung Galaxy S5 will come in four different colours – white, blue, black and gold and will be available in 150 markets starting from the 11 April. No details are yet available on pricing.

Since the invention of the internet people have been thinking of different ways in which they can take advantage of it - and one of the developments that has come from computers and the internet has ...
0

Bacula is a set of computer programs that permit you (or the system administrator) to manage backup, recovery, and verification of computer data across a network of computers of different kinds. I...
0
Back to Homepage