Goodbye WYSIWYG How WordPress 5.0 Will Change The Way You Work

Goodbye WYSIWYG How WordPress 5.0 Will Change The Way You Work

News of the imminent release of WordPress 5.0 has been coming for months, but only now are we starting to find out the changes this milestone update will bring and how it will affect the 31% of the world’s websites that are built using the platform. Here, we’ll look at the biggest development that’s in store.

The TinyMCE WYSIWYG editor has long been an integral feature of the platform, enabling users to create content from scratch within WordPress. However, it’s become tired over the years and many users now install plugins or third-party-themes to get the visual editing capabilities they want.

To bring WordPress up-to-date and to satisfy user preferences, version 5.0 will retire WYSIWYG and replace it with Gutenberg. Named after the inventor of the printing press, Gutenberg enables the creation of pages and posts using what WordPress calls blocks. Blocks are essentially the different types of content formats you need to create a page, e.g., text, images and videos.

To make page creation easier and more creative, blocks can be dragged and dropped to create custom page arrangements and the content of each block can be worked on independently. This enables WordPress to produce visually attractive pages without the need to use shortcodes or custom HTML or having to pay annual subscriptions to third-party theme developers who already provide similar functionality.

Another key feature of blocks is that they have their own markup which is of significant benefit for SEO as it enables search engines to better understand your content and return more helpful search results for their users.

The impact of Gutenberg

While Gutenberg is certainly a step forward, it could also have some teething problems, especially in its compatibility with other plugins. Here we’ll look at how it might affect users.

When WordPress 5.0 launches, there will be significant changes to the way users create content. Anyone who has used third-party plugins from developers like Elegant Themes or installed page builder/visual composer plugins from the depository may be familiar with the process. Others, however, will have to undertake a bit of learning to get used to the way things work.

That said, the rewards promise to be worth it. The use of blocks means that code-shy users will be able to create better-designed pages without adding HTML, something which would have been difficult with WYSIWYG. With Gutenberg, there are pre-coded block templates for the various elements of content that a user may want to put in a post. They simply drag a block to where they want it positioned, then click on the block and add the content. There are blocks for such things as titles, paragraphs, images, quotes, and various other elements. Whether the range of blocks on offer is as varied as those provided by third-party plugins remains to be seen.

Aside from improved functionality, Gutenberg simplifies the process of page design and removes the need to constantly save changes to look at previews.

The one drawback for content creators, however, is that it can slow down the flow of writing for those who are used to rattling off drafts of posts at speed. With WYSIWYG, you write your title and move immediately on to the next paragraph. With blocks, you’ll need to open up the title block, write the title, save it (unless autosave is included) and then open up a paragraph block and drag it into position, before continuing.

Many eCommerce plugins have in-built coding to create specific types of pages: shop fronts, product pages and checkouts, for example. Such a major WordPress overhaul is obviously going to have some impact and changes may need to be made so that these plugins can integrate fully with the new version.

On the upside, the introduction of Gutenberg may make integration simpler as product pages can be designed using blocks and the necessary eCommerce content can be imported by the plugin into the specified elements of the page. Essentially, it means that templates can be made without the need to code.

However, this means there may be changes to the way products are added and this, certainly in the short term, will cause problems with eCommerce companies that are unfamiliar with how to work in this new environment. Another potential issue is that some plugins may not be ready by the time v 5.0 is released, if this happens, users of those plugins may have to delay updating to the new WordPress version.

WordPress v 5.0 is due for release sometime in mid- 2018. The replacement of WYSIWYG with Gutenberg is designed to improve the functionality of its content creation capabilities and bring it into line with many of the plugins that are now available removing the need to use them. Whilst it will enable the creation of better-designed pages, there will, undoubtedly, be teething problems with regard to plugin compatibility and frustration from users who initially struggle with the new set up. 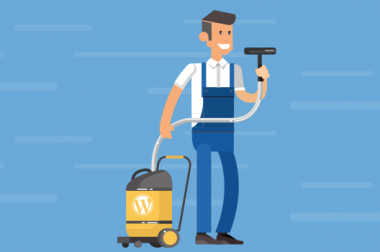 Just like your computer, a WordPress website can get full of clutter as time goes by and it's important that once in a while you take some time to have a clear out. Removing clutter from WordPress can...
0

When you add a post to your WordPress website there are limited ways it can get read: visitors can stumble across it, it can show up in Google search results (if you're lucky), or your subscribers mig...
0
Back to Homepage